The most recent version of this webpage can be found here

It’s Your Game…Keep it Real (IYG) is a classroom- and computer-based program for middle school youth. The curriculum is grounded in theory and was developed to prevent teen pregnancy and sexually transmitted diseases (STDs), including HIV. IYG emphasizes abstinence but also teaches students how to protect themselves from pregnancy and STDs using medically accurate information. 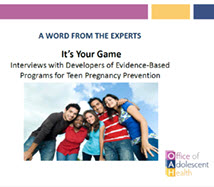 Check out this webinar given by Dr. Melissa Peskin on the Office of Adolescent Health (U.S. Department of Health and Human Services) website! Audio for the slides is available here.

The goal at The University of Texas Prevention Research Center (UTPRC) is to work with parents and school districts to implement an effective, fact-based curriculum that leads to healthier futures for teens in Texas. Here are the facts about the It’s Your Game… Keep It Real (IYG) curriculum developed by researchers at UTPRC:

Research indicates that involved parents are effective in educating their teens on sexual health topics; however, many parents are not having these critical discussions.

UTPRC is strongly committed to providing accurate information about the content, development, and funding of its research in general and IYG in particular. Here are the answers to some of the most frequently asked questions.

The Digital Media Award from the Public Health Education and Health Promotion section of the American Public Health Association (2010).

It's Your Game: Future Directions

It’s Your Game…Keep it Real (IYG) Tech was developed and evaluated to determine its impact on sexual initiation and other risk behaviors. IYG Tech is a completely online curriculum designed to prevent teen pregnancy and sexually transmitted diseases, including HIV. It is an adaptation of the original IYG program. Results from the IYG Tech evaluation will be published this year in the Journal of Adolescent Health.

Native IYG has been developed and is currently being tested for effectiveness in delaying sexual initiation among middle school American Indian/Alaska Native (AI/AN) youth. Native IYG is cultural adaptation of the IYG Tech and original IYG curricula for AI/AN youth to prevent teen pregnancy and sexually transmitted diseases, including HIV. Evaluation of Native IYG is scheduled for completion by Spring 2015.

+CLICK (Positive Click) is a collaborative project between investigators at Baylor College of Medicine (BCM) and University of Texas Center for Health Promotion and Prevention Research (UT CHPPR) to develop a prototype tailored, computer-based application to enhance self-management skills among HIV+ youth. The theory-based application is intended for use in a pediatric clinic setting with youth ages 13-24 (perinatally- and behaviorally-infected) and includes modules on sexual risk reduction and medication adherence. From 2006-2008, we developed and pilot-tested the sexual risk reduction module and developed a prototype Antiretroviral Therapy (ART) medication adherence module, which was pilot-tested with HIV+ youth in summer 2009.