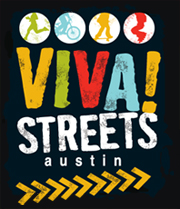 Can we start to think creatively about ways to make space for physical activity available to more people near where they live?

Austin, Texas will experience one example of such creative thinking this Sunday, May 20th, in its first “Viva! Streets” event, which aims “to build community, transform a street into public space and encourage active living through recreation, fitness activities, and healthful food options.”

In parsing the many influences on our collective, worldwide slide towards physical inactivity, fingers have been pointed at the built environment – our transportation systems, zoning patterns, public spaces, and other elements of the human-made landscape in which we live, work, and play.  This connection may be most apparent when people attempt “active transportation” – non-motorized travel to destinations such as work or the grocery store.  Yet a number of studies have also found associations between physical activity for recreation or exercise and proximity to recreational facilities, such as parks and trails.

But building new parks is costly and time-consuming, and more research is needed before we can state with confidence what infrastructure changes will pay off in terms of expected health outcomes.  For those who would like to be active, children and adults alike, living in neighborhoods that lack safe spaces for exercise and recreation means that physical activity is not the easy choice, but one that requires scheduling, driving, and lots of motivation. 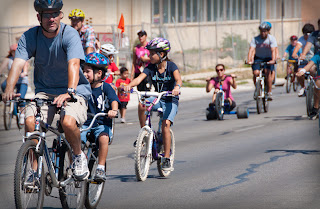 From 10am to 3pm, Austin's famous Sixth Street will be closed to motor vehicles, and open to all sorts of activities, including biking, skateboarding, and a number of free exercise classes. “Viva! Streets” is a variation on a concept that originated in 1982 in Bogotá, Columbia, called the “Ciclovía.” The City of Bogotá currently closes over 75 miles of major roadways for seven hours on Sundays and holidays, bringing safe space for play and exercise into the neighborhoods of thousands of residents on a regular basis.

Events like “Viva! Streets” can promote neighborhood cohesion, demonstrate that streets can be shared without undue burden on drivers, and get people moving for a few hours – all worthy goals.

The question from a public health perspective is, will this lead people to habitual physical activity, the kind that helps people achieve the CDC-recommended 150 minutes weekly of moderate to vigorous intensity physical activity for adults, and 60 minutes of daily activity for children to achieve health benefits?

Imagine if each Sunday, several miles of streets throughout Austin (or every city in the world!) were closed to motorized traffic. Such closures can be done without any promotions, sponsors, or organized activities (other than ones that people might offer for free). By sharing pavement with non-motorized users during off-peak times on a weekly, or monthly basis, we would be creating new spaces for physical activity, close to where people live.

"Viva! Streets" is a creative way to bring safe, accessible spaces for physical activity into the neighborhoods where people live, making the choice to be physically active just a little bit easier.

Let your voice be heard, would you be interested in doing something like this in your neighborhood?

Eileen Nehme is a doctoral student studying epidemiology at the UT School of Public Health, Austin Regional Campus. As one of the MSD Center’s “Dell Health Scholars” she investigates the impact of policies and environments on public health, with a focus on population-level physical activity. When she is not working or studying, she is likely to be playing in a neighborhood park with her two daughters.