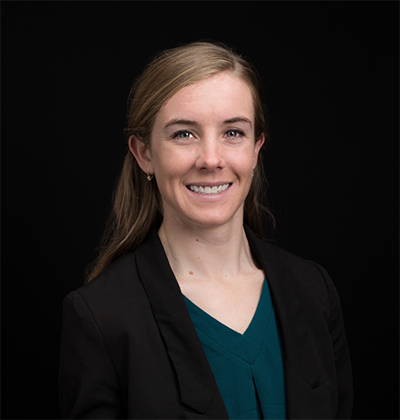 Dr. Leigh Ann Ganzar is a Postdoctoral Research Fellow with the STREETS project at the Michael & Susan Dell Center for Healthy Living, part of the UTHealth School of Public Health. The STREETS (Safe TRavel Environment Evaluation in Texas Schools) project evaluates the effect of the City of Austin Safe Routes to School infrastructure program on the physical activity of elementary school students. The Principal Investigator of the STREETS grant is Dr. Deanna Hoelscher, with Drs. Deb Salvo, Casey Durand, Adriana Perez, Shelton Brown, and Bill Kohl serving as co-Investigators.

Dr. Ganzar started her journey in public health as a collegiate runner at Baylor University, where physical activity and health were her main focus. She completed her Master of Public Health during her fifth year at Baylor to maintain her athletic eligibility. After graduating and transitioning out of collegiate running, she became more interested in walking and biking through her experiences as a professional road cyclist. Now retired from racing, Dr. Ganzar has firsthand experience with the streets she studies. Working on the STREETS project was a fitting path for her to take.

Because the main outcome of the STREETS study was to determine changes in children’s levels of active commuting to school and physical activity, the study team had to quickly adapt to research limitations during a pandemic. With children no longer going to physical school buildings, the study team collected data from children both in and outside of the schools, which provided an opportunity to assess the effects of COVID-19 on child physical activity.

Most other studies evaluated the effects of COVID-19 on physical activity through self-reported surveys, which allowed for potential bias. This study was unique because kids wore accelerometers that measured their physical activity in a more objective way before and during the pandemic.

“It’s an issue when they already have low levels and are decreasing even further,” Dr. Ganzar said. “It has implications for their physical activity habits beyond this study.”

Neighborhood social cohesion, or the feeling that you trust your neighbors and share values, was a factor determining these groups. Kids in areas with high levels of social cohesion were more often in the group that maintained high physical activity during the pandemic.

“If parents trust their neighbors, they’re going to let their children outside and play,” Dr. Ganzar elaborated. “I thought that was an interesting finding.”

Dr. Ganzar was surprised by the results of kids with a high level of social cohesion and the inverse relationship found in sedentary behavior.

Researchers hypothesized that low social cohesion could have prompted kids to have physical activity inside, whether imaginary games or even chores. These activities may not be as rigorous but still register as physical activity.

Now that Dr. Ganzar and the STREETS team can resume their main research goals, they are finishing their fourth year of funding, and have one more year on the grant studying the City of Austin’s infrastructure in getting to school.

Dr. Ganzar is excited to see how the City of Austin’s funding for safe routes to school will impact active commuting in the coming years, as the bond funds new infrastructure including protected bike lanes, pedestrian islands, shared-use paths, and pedestrian hybrid beacons.

Most recently, her publication “Longitudinal Changes in Objectively-Measured Physical Activity and Sedentary Time Among School-Age Children in Central Texas, US During the COVID-19 Pandemic” was published in the International Journal of Behavioral Nutrition and Physical Activity.

“In 5 to 10 years, I think getting to school will be a lot easier,” Dr. Ganzar said. “After the built environment changes from the 2016 bond and the 2020 bond, each school in Austin will have had barriers to walking and biking to school removed through the construction of infrastructure.”

From the streets of Austin’s schools to the street of European cycling races, Dr. Ganzar is making huge impacts in the world of active transportation. To learn more about Dr. Ganzar and her work with the STREETS project, click here.